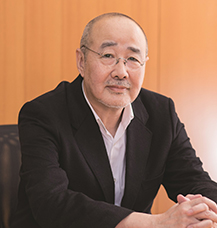 I believe that presenting Japanese content, food, and service to the world has extremely high potential. I have seen this in entertainment industries, such as music and film, in which I have spent a long time working. Japanese food was very popular at the Milan World Fair and a steadily increasing number of tourists visit Japan every year.

Due to the Tokyo 2020 Olympic and Paralympic Games, recently the world is paying more and more attention to Japan. Cool Japan Fund has reached its fifth year and I believe it is time to move forward to a new stage. We would like to contribute even more to industrial development in the field of Cool Japan by promoting excellent Japanese products and services that we are proud of and passionate about while accurately judging the ever-changing world market.

We hope that numerous companies will be with us to take on the world.